I participated in an Influencer Activation on behalf of Influence Central for Carter’s. I received a complimentary gift card to facilitate my review and thank me for my participation.

At the beginning of each season I take a look though my kids closets, purge things they can’t wear anymore, move out of season pieces into storage and and make lists of things they need. After that, I go online and fill up carts at my favorite kids clothes retailers, research coupons and savings and wait for sales before finally hitting the purchase button. I am a sucker for children’s fashion, and clothing is something that I don’t skimp on for the kids. I don’t get myself new clothes often, maybe a few things each year, but for them? They grow so fast that I have to constantly keep a fresh rotation which can add up to some major spending. I stay away from second hand clothes because we all know they take quite the beating over time, and for me personally I just haven’t had much luck finding items that have been kept in great condition. I’m no luxury shopper, but I do make quality and style a priority so my first stop is almost always at Carter’s. 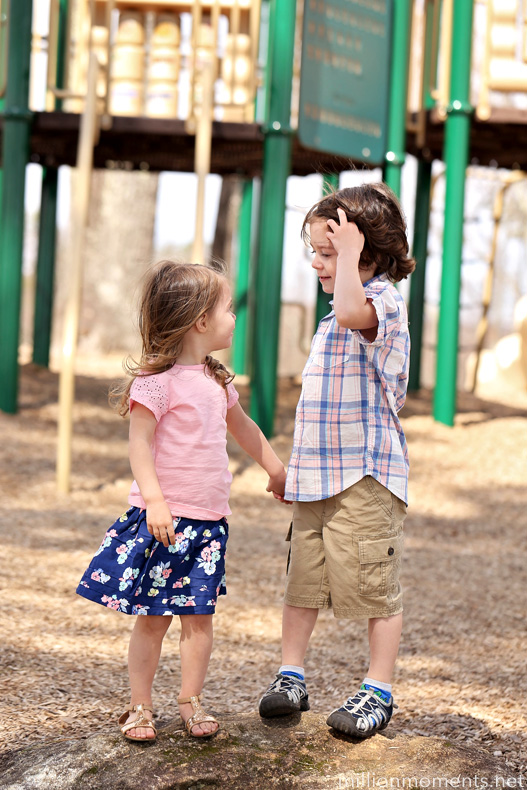 This year I was amazed at how much didn’t fit Kaia from last year. I mean, whoa. How in the world did she grow that much in eight months? I had to toss every single pair of shorts and all but one dress in the donation pile so she’s basically starting from scratch. Luckily Carter’s has the cutest girls Spring pieces this year that I’ve seen in a long time! She’s a girly girl, but I’m not a fan of all that sparkle, so something like this adorable pink lace sleeve top and blue printed sateen skirt are perfect for warm Spring days ahead. Oh, AND it’s just beautiful for photo sessions, which you know I’m a big fan of! 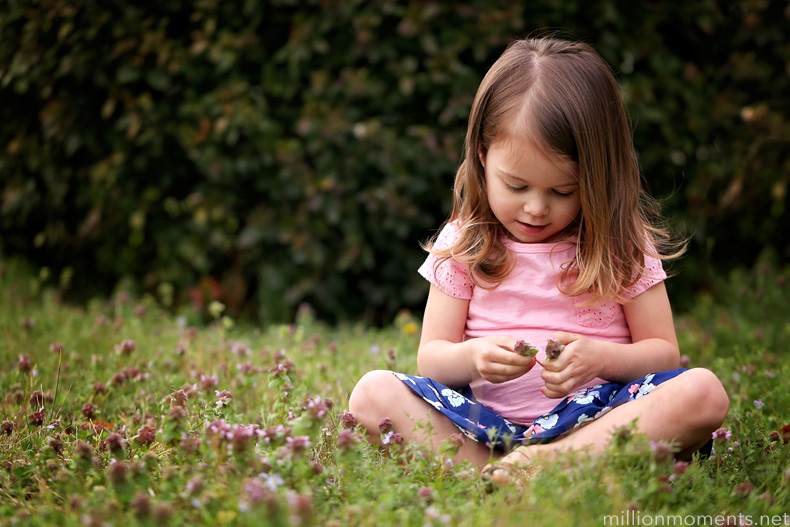 I also picked up a few pairs of shorts for her, with my favorite being this minty polka dot pair. Mint is a super popular color this season, but I didn’t have much that would go with the shorts so I also scored a cool tangerine tinted graphic tee that matches them perfectly. 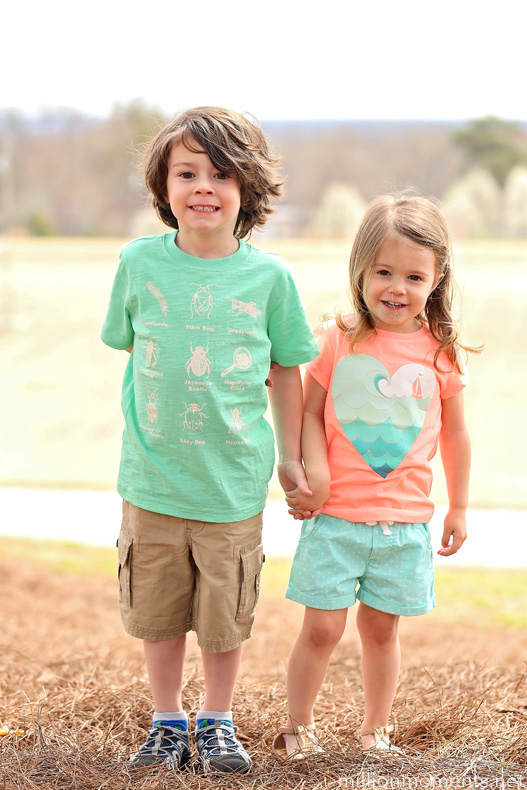 Besides Kaia physically growing like a weed lately, I’ve noticed that she is starting to mature a lot in her actions and how she relates to others as well, especially when it comes to her big brother. It’s really fun to see their relationship blooming into something amazing, and they are starting to enjoy each other a lot more than they used to. They share without being asked to, they help each other do things, they hold hands, and they think of each other when they’re not together. Heart = melted. Cue the waterworks, my babies are growing up! 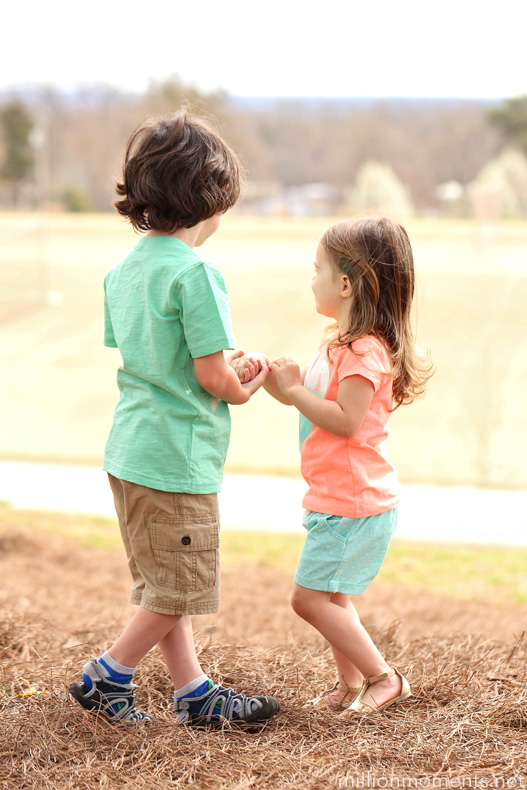 Speaking of growing, who is this giant kid? Judah has transformed right out of toddlerhood before my eyes. I’ve been letting him pick out his own clothes for a while now, and I think it gives him a great sense of independence to choose his outfits both at the store and as he starts his day. It isn’t a big thing, but it is still a milestone! He didn’t need much in the way of shirts, but he did pick out this cool glow in the dark bug tee and of course I just had to get it because cute! I mostly got him shorts though, because he’s gotten taller and his old ones were just a little too short. 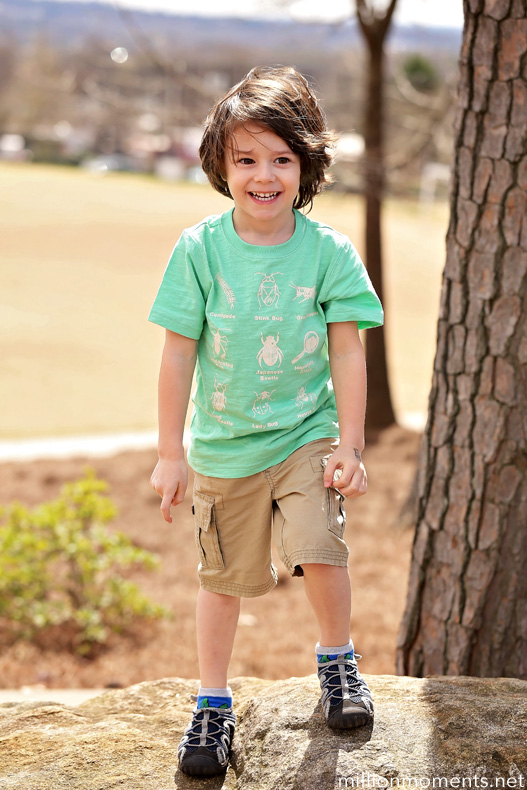 When shopping for Spring wardrobe staples I think it’s important to have variety, but I also love it when pieces can be worn interchangeably with each other. Carter’s does a great job of offering tons of items that can be mixed and matched, and with their fabulous prices and frequent sales I always end up getting a lot of bang for my buck! Speaking of deals, I’ve got a sweet coupon for your next trip to Carters! Use this from now until April 5th to get 25% off a purchase of $40 or more. I know I’ll be using it to grab a few last minute vacation items like swimsuits and playwear. Since it’s April I know you’re probably in need of some adorable Easter clothes, so head on over because Carter’s has you covered! 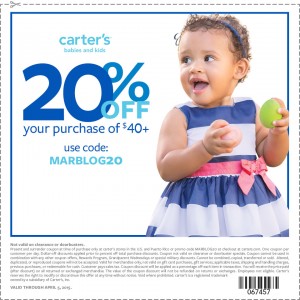