Imagination and pretend play are very important in childhood.  Kids need to be able to unplug and escape their normal surroundings for a new world every now and then, and it is our job as parents to nurture that creativity and help it blossom.  Some children are born with creativity and imagination in spades, always pretending their toys are something new and bringing everyone around them into their own made up world.  But some aren’t.  Some, when handed a “microphone” for their on stage debut stare up at us with a “what in the world are you talking about” look and insist that no, their hairbrush is NOT a microphone.  Judah is one of those kids, but with the help of Costume Express and some creativity on my part I was able to drag him away from his iPad and into a magical world full of treasures and fairy sidekicks for one awesome day! 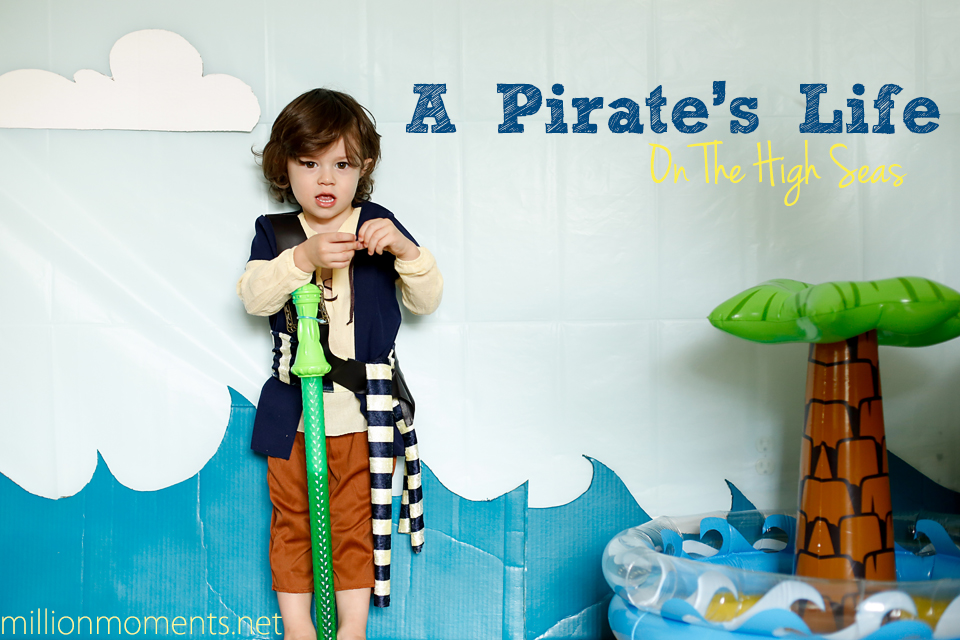 For an Autistic child, it isn’t enough to simply encourage their imagination.  They need something physical that they can see and touch, so when Judah decided that he wanted to try out a pirate costume the wheels in my head started turning.  How could I take playing dress up one step further and make it real for him?  I decided to transform our backyard into a brand new world and send him (and his tiny fairy sidekick) on a pirate’s quest!

The first and most important thing a young pirate needs is the outfit.  After all, you can’t play dress up without a cute costume!  I scored these online from Costume Express, aren’t they adorable?  I was blown away by their huge selection, when I typed in ‘Pirate’ over 100 costumes popped up in every shape an size imaginable!  We were able to narrow it down with a few clicks and Judah eventually settled on this awesome Pirate Mate costume.  I had to get Kaia one too, and I immediately fell in love with this Tinkerbell costume when I saw it! 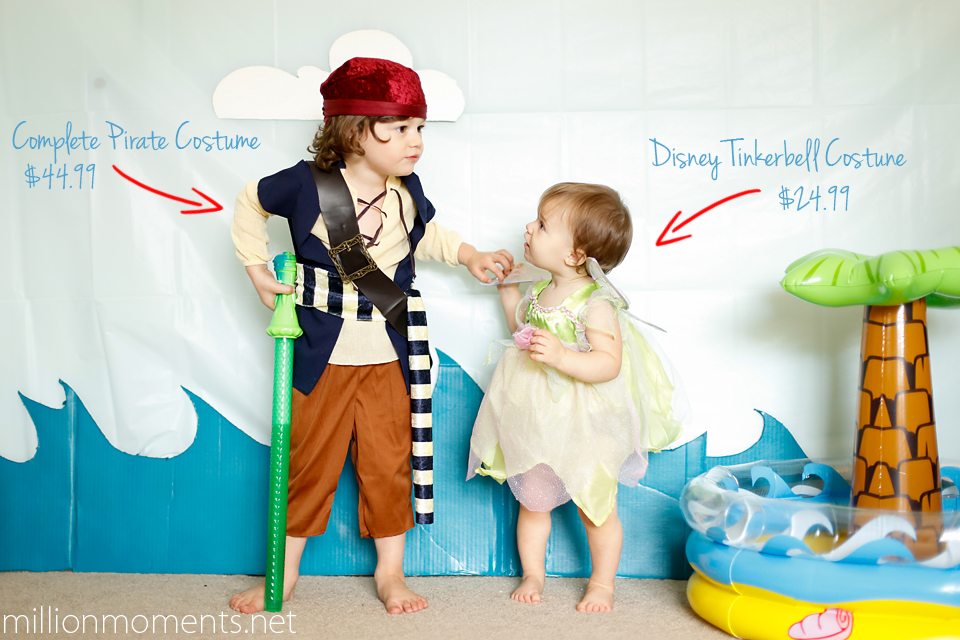 Once the costumes came it was time to have an adventure.  I made up a treasure map that coordinated with stations I had set up around the yard that included a pirate ship, a deserted island and a hidden grove with a treasure chest!  We started our quest as soon as we stepped outside, and the first thing Judah did was consult his treasure map to find out where to go. 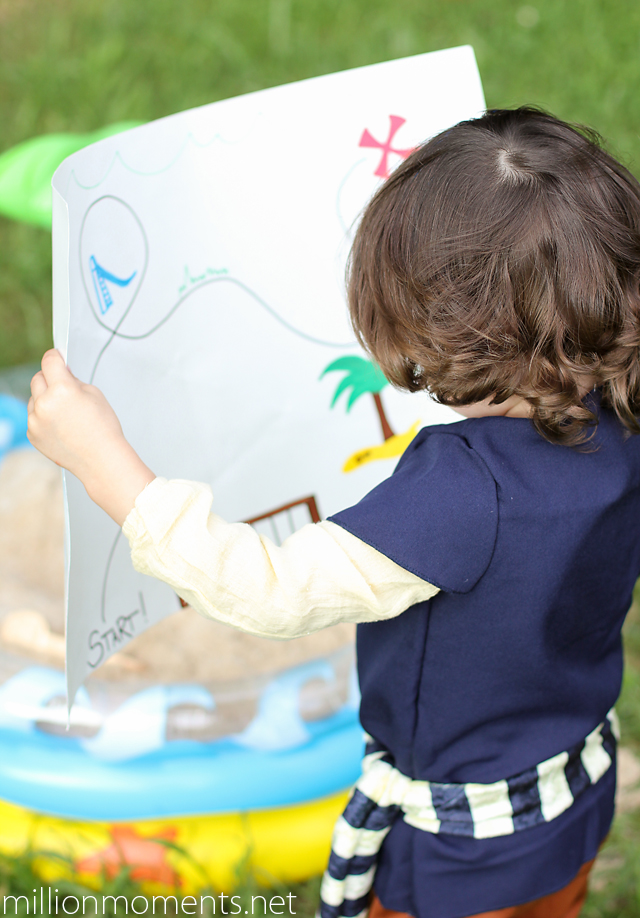 The first stop on the journey was the pirate ship where my little adventurers climbed on, charted their course and set sail. 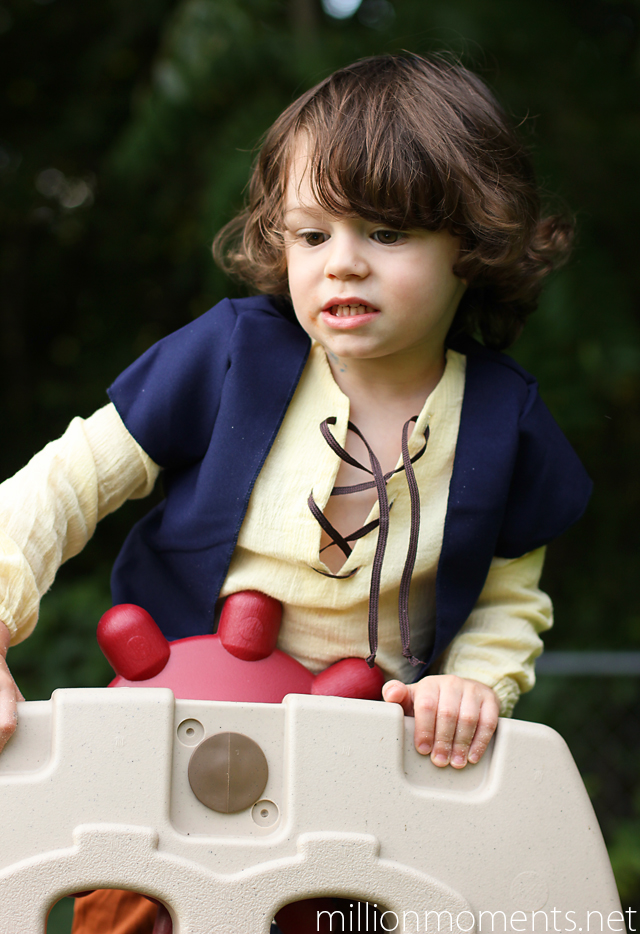 Next up was a visit to the deserted island where a key to his treasure was hidden.  Hiding objects in sand is a great sensory activity for any toddler, but especially for those with Autism.  Judah has a hard time reacting and responding appropriately to his environment so activities like sand and water play are great tools to help him learn how to to do that.  Not only is it super fun, but digging in and feeling the sand helps calm him too! 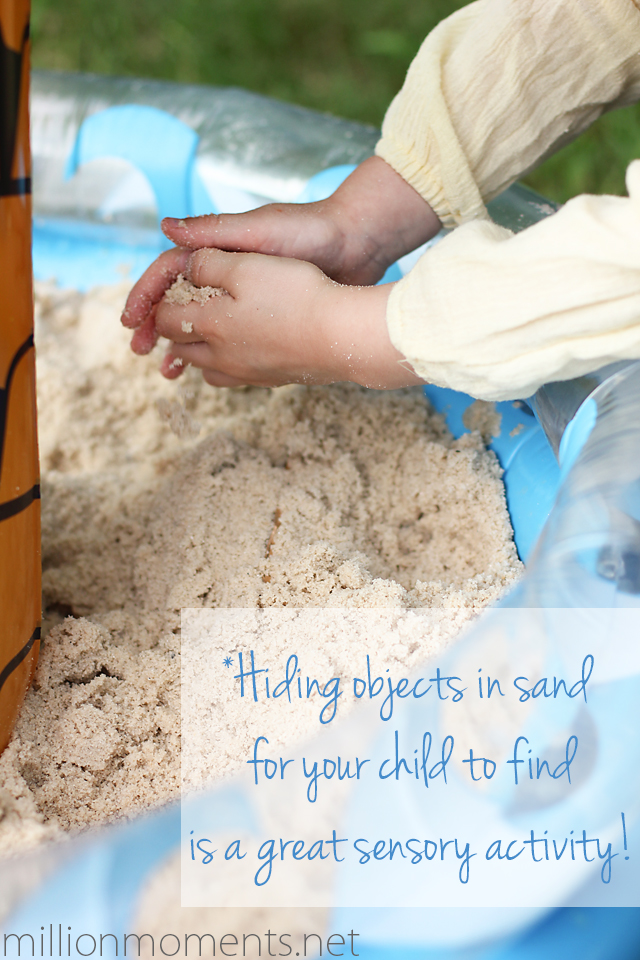 I hid the key pretty well, but with the help of a little woodland fairy it was found in no time!

After a quick thank you hug, Judah tucked the key into his belt and set off in search of his hidden treasure. 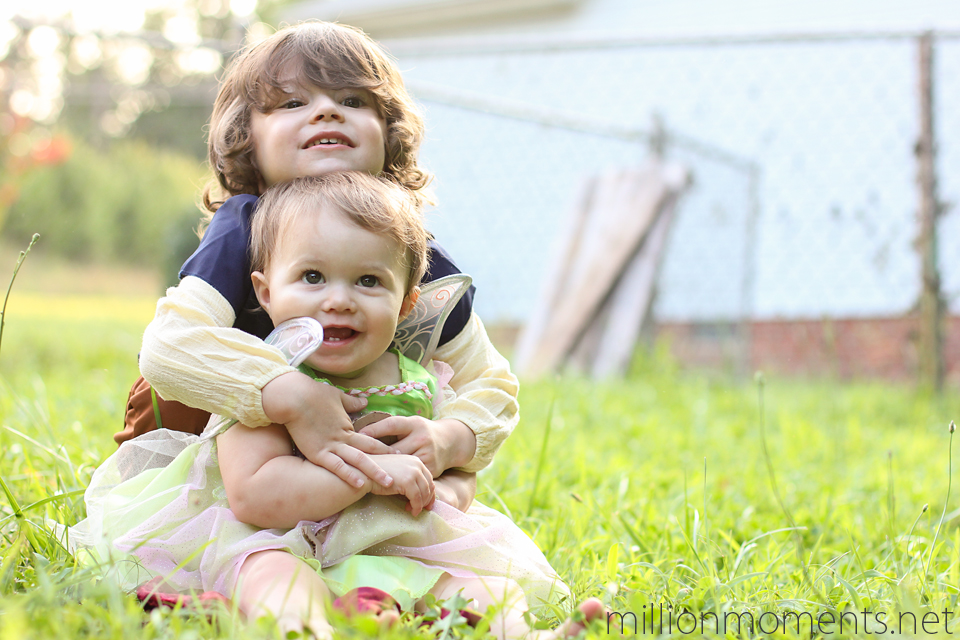 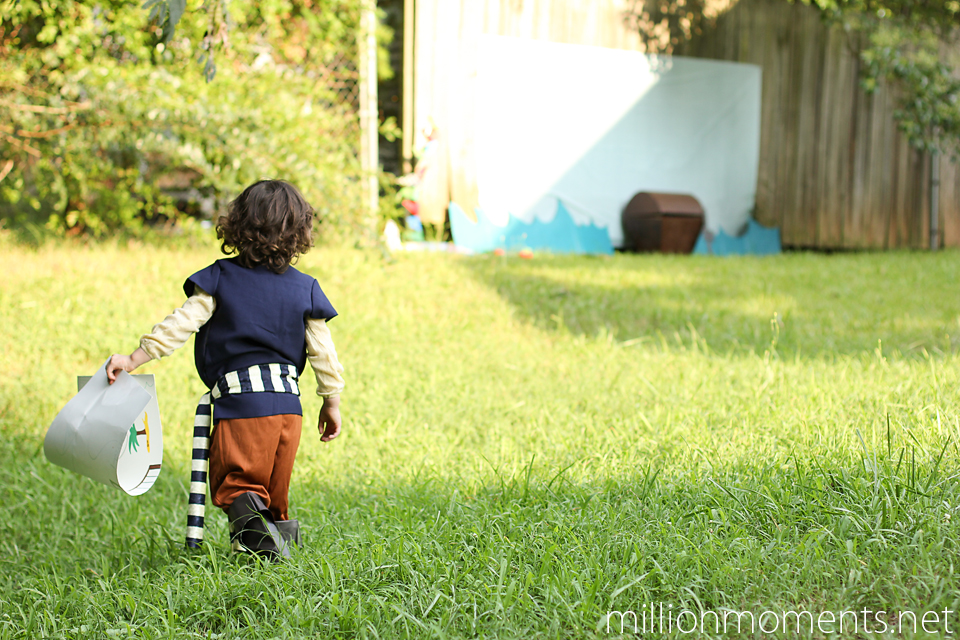 Looks like he found it!  I wanted the treasure to be something fun and inexpensive so I made a chest out of cardboard, spray painted it and then filled it with gold painted cardboard coins and a new book.  It was super easy to make and between the paint and book cost me less than $10.  He LOVED “unlocking” it with his key and immediately started reading his book once he found it! 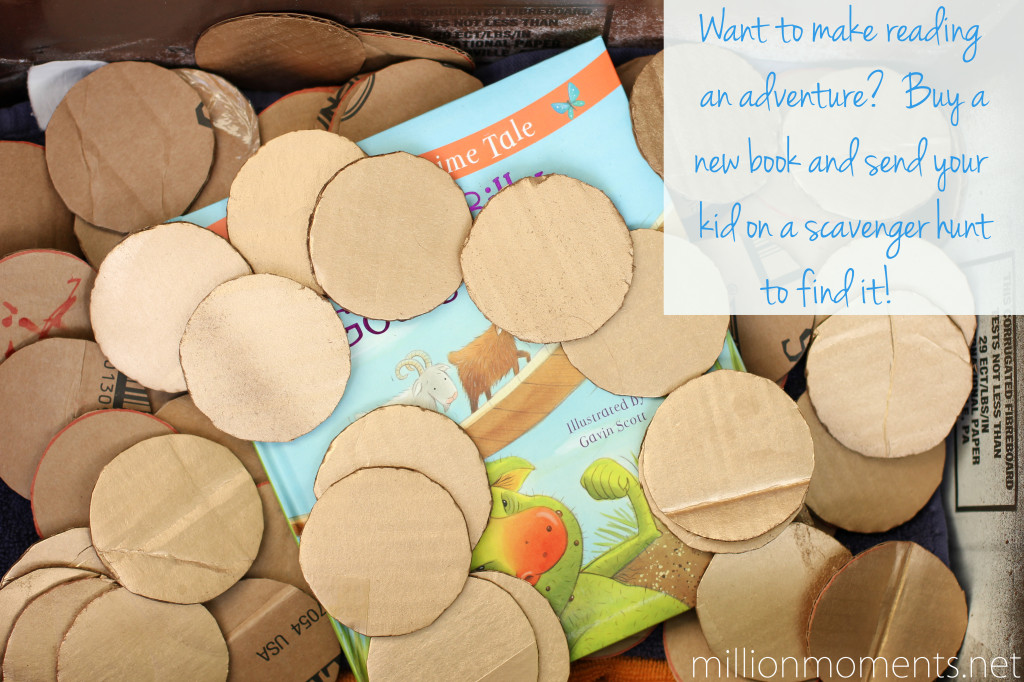 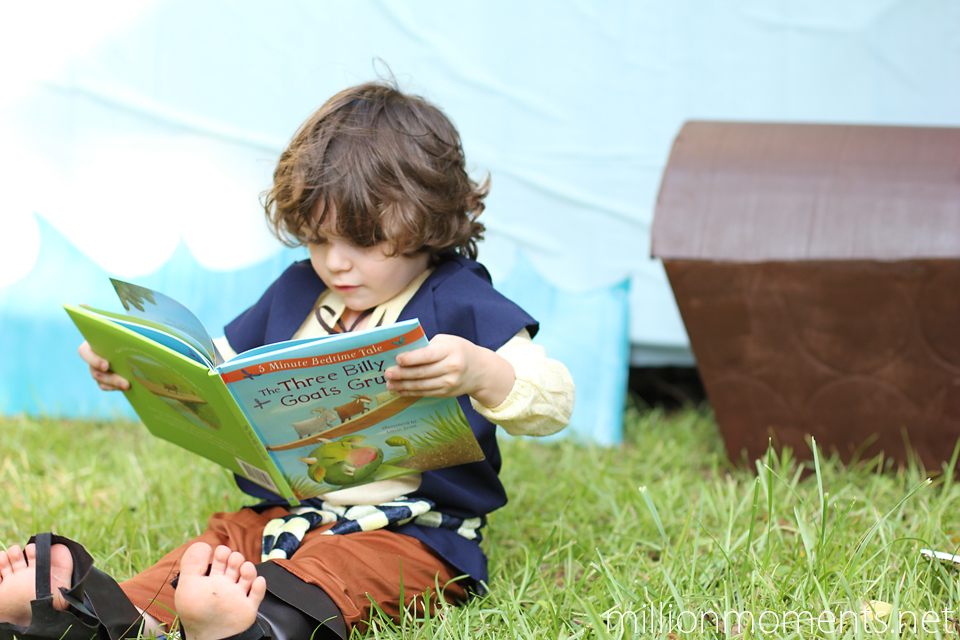 The quest was finally over, the kids had a great time and I felt a huge sense of pride that my amazing little boy could turn into a pirate for a day through dress up and pretend play.  As the sun was setting, I looked at my kids and promised myself that we would spend the rest of the summer unplugging from our normal electronic lives and have more adventures, discovering different worlds and tons of fun along the way.  After all, magic happens when you #Unplug2Play! 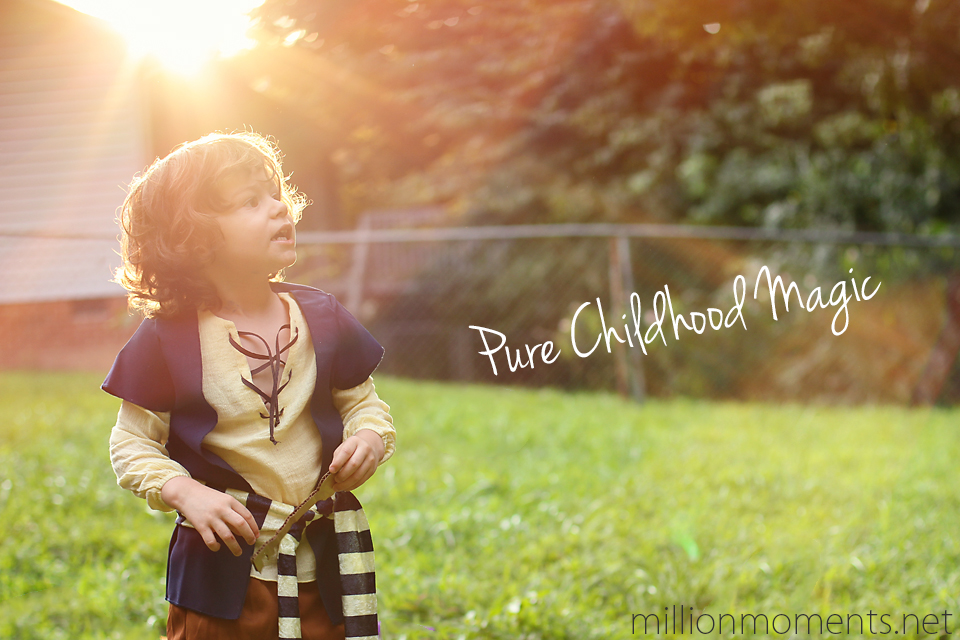 Want to check out the awesome selection at Costume Express for yourself?  Head over to their website.  All orders over $75 get free shipping, and don’t forget to sign up with your email address to receive 15% off your first order!  You can also stay up to date with them on Facebook.