This shop has been compensated by Collective Bias, Inc. and its advertiser. All opinions are mine alone. #BDayOnBudget #CollectiveBias

I can’t believe it, but Judah just turned FIVE!  I wanted to go all out and throw him an over the top party, but between supply lists and new clothes for the upcoming school year I needed to do it without breaking the bank. So, in an effort to make the coolest party I could and save money at the same time I combined store-bought accents with some adorable DIY, and what I came up with was amazing! 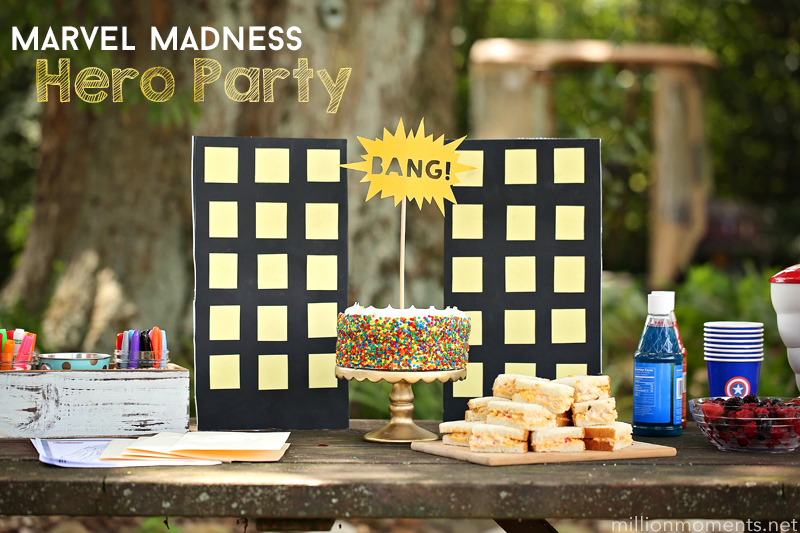 See that? Awesome, right? Even though it was small it had some serious coolness going on, and thanks to the affordable American Greetings party supplies I found at Walmart I kept the whole thing under $150. I don’t think I’ve ever pulled off a party for that, and I’m pretty impressed with myself here. I usually do a lot of diy for my parties, but crafting can get expensive, so this maker actually used store-bought party decor and you know what? It was perfect! So, let’s talk about the ins and outs of this adorable spread. Any good children’s party has party favors so I started there. I’m not usually big on party favors, but when I saw these Avengers cups for less than $1 each in the Celebrations aisle I just had to get them and stuff goodies inside! 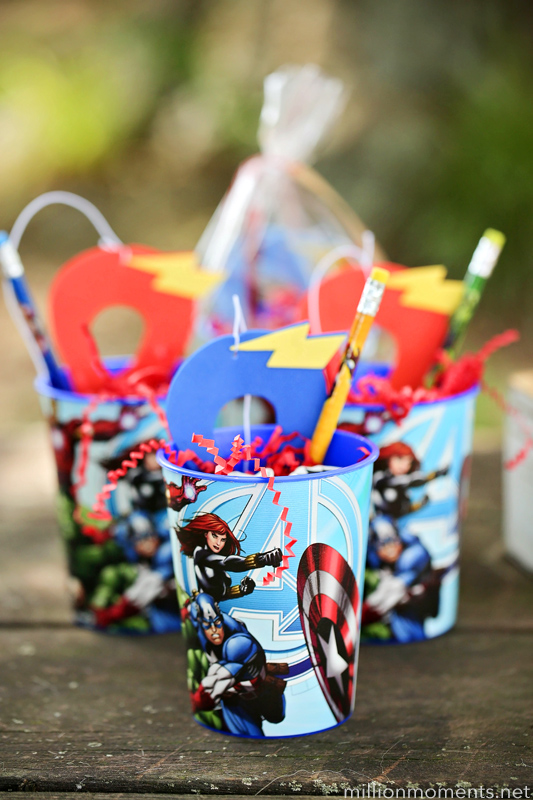 I put a hand full of confetti crinkles in each one, and since school is starting next week I added a few erasers and pencils, then a fun bracelet and an adorable foam mask. The entire favor creations cost around $2 each including goodies inside, which is pretty awesome considering how cute they are! 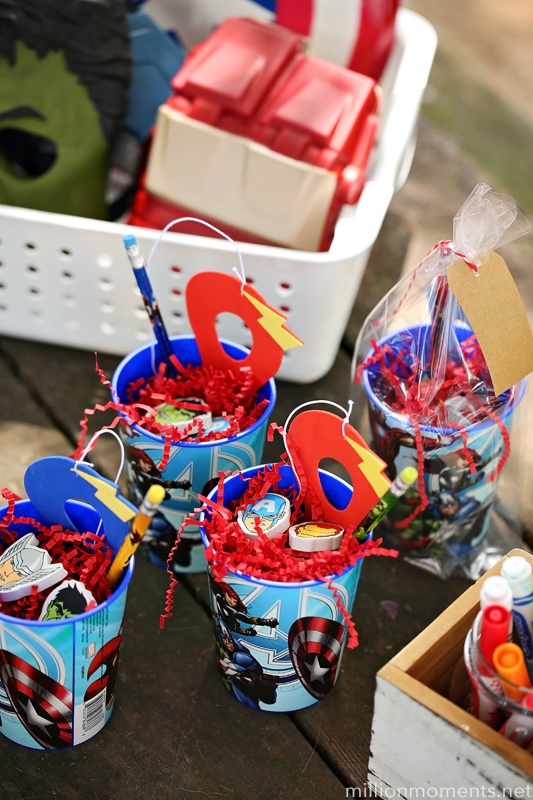 For the activities I wanted to think of something super fun that let them use their creativity and get thinking skills going. I printed out a bunch of MARVEL coloring pages to color in, and then afterwards I sent them on a little scavenger hunt. 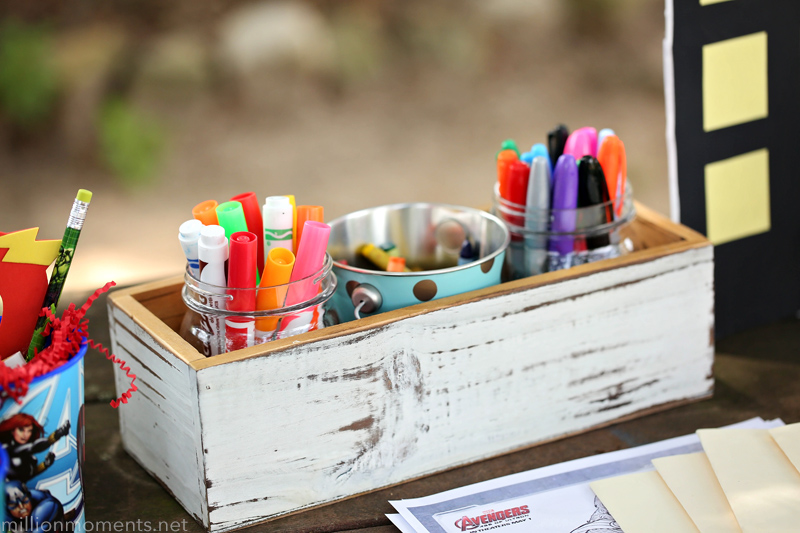 You might remember my last superhero party had similar “mission” printables, and they were such a hit that I had to include them this time. But for this party I made it a scavenger hunt instead of an obstacle course, and at the end everybody got to sit down and eat cake! You can print these out for yourself here. (It is blurry on the computer – it will not be when printed) To make the folders themselves, just grab some cream colored card stock and fold it in half, then glue in your scavenger hunt sheet inside. Voila! 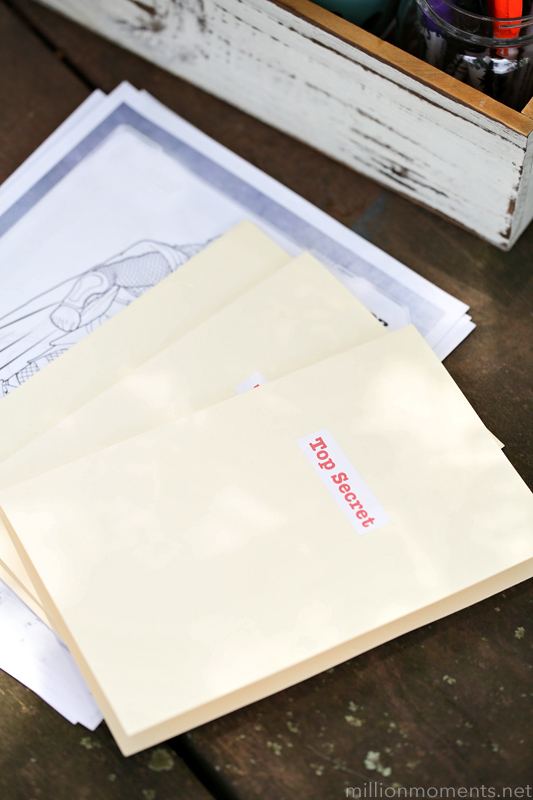 The children had a great time, and I was pretty proud of myself for such a cute idea! 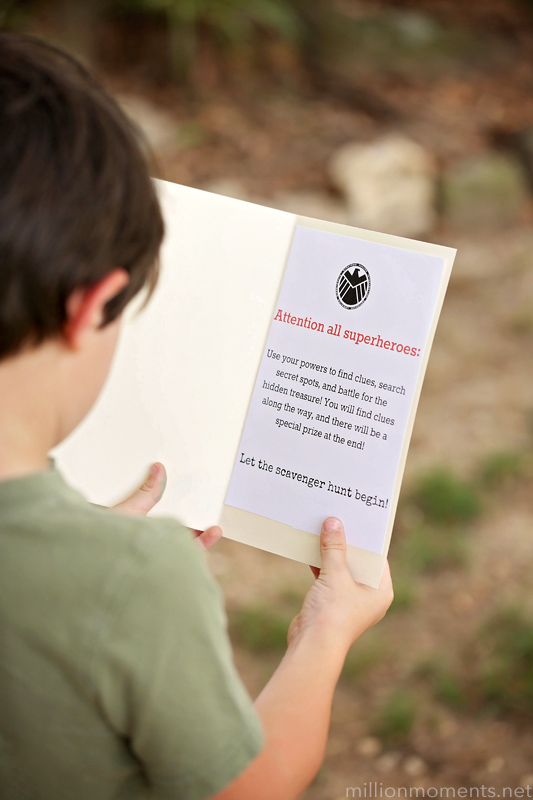 Moving on to the food, I have to gush about our cake. It was seriously the cutest thing I think I’ve ever done for a party! The cake itself was a vanilla cake with rainbow sprinkles along the sides, and get this – it was just a generic Walmart bakery cake that cost me $10. TEN dollars!! It was just as delicious as the custom cakes I normally get, so I’m super happy I found that out because it will save me a ton of money in the future. I dressed it up with two “buildings” I made out of black foam board (with construction paper windows) at the sides and an adorable sign that I printed and cut with my electronic cutter. (You can get the pattern here – for personal use only.) 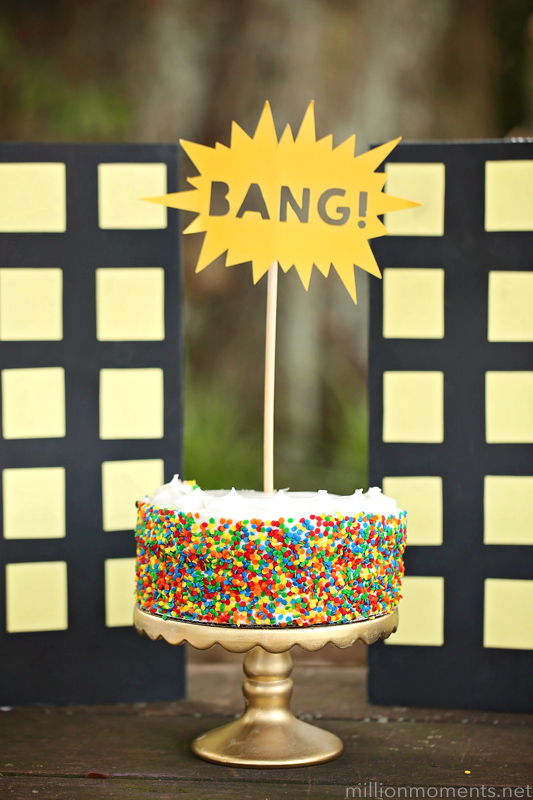 I can’t get over it – the setup was absolutely perfect! 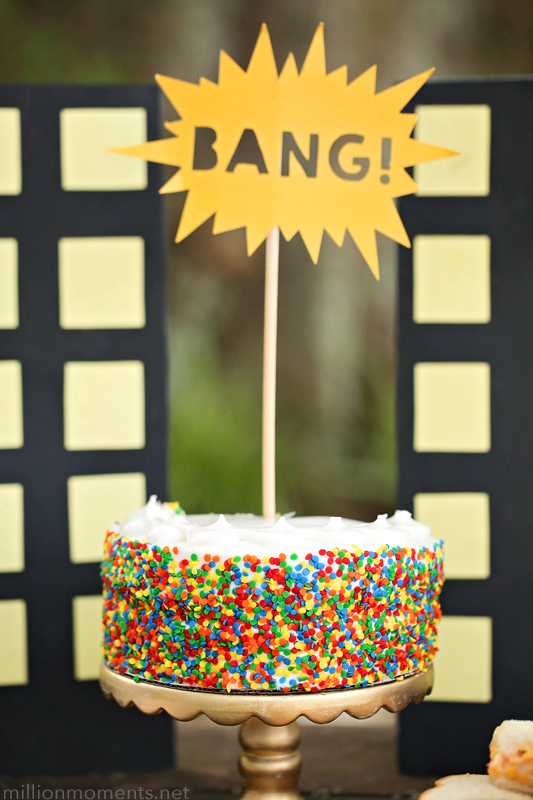 I also made up some easy pimento cheese sandwiches for the guests, set out a bowl of mixed fruit, and even had a snow cone machine for refreshments! 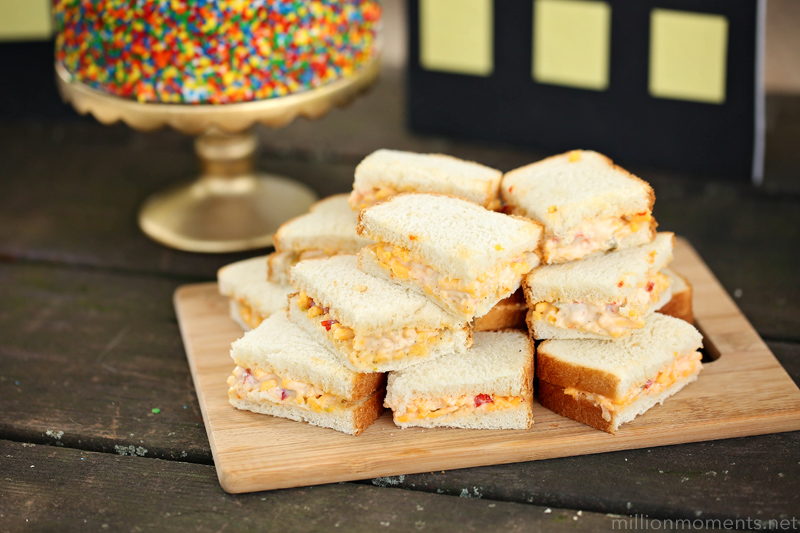 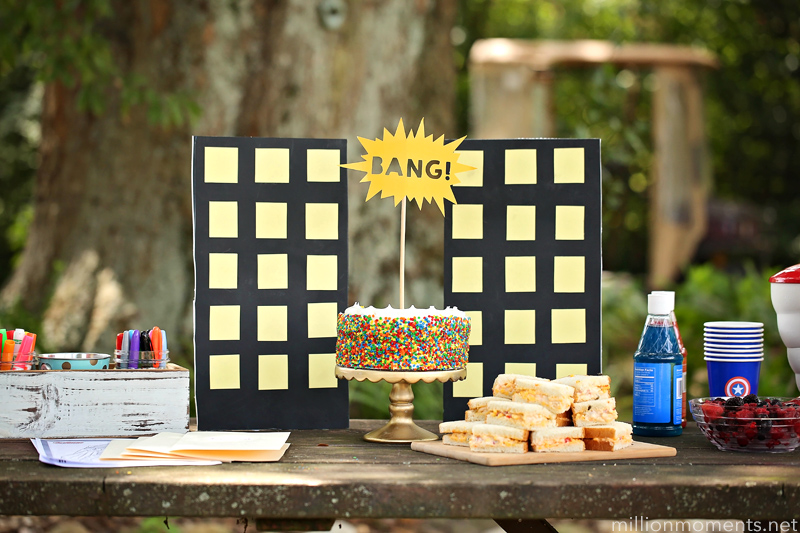 At the end of the party each little hero got to have their picture taken at the “superhero wall” where I had a fun backdrop and several props out for them to choose from as well as these cute paper masks that they got to take home with their party favor cups. 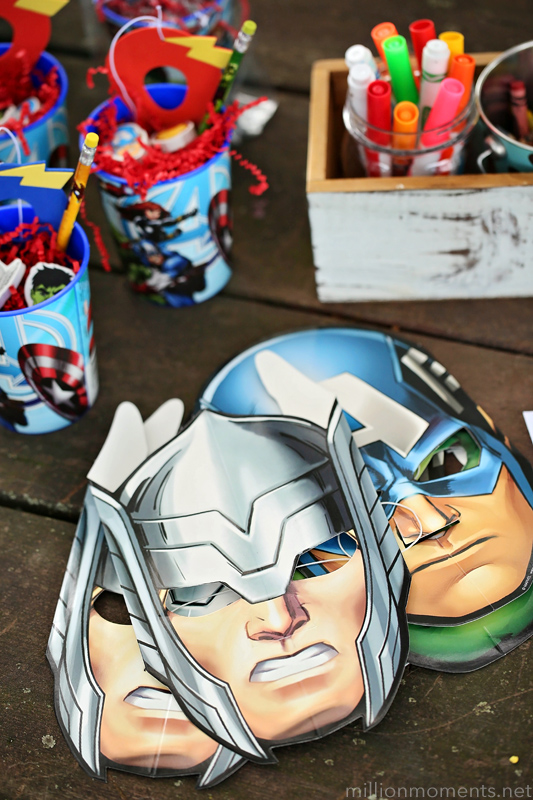 I loved seeing their silly faces as they posed, and it was adorable to watch them choose which superhero they wanted to be! 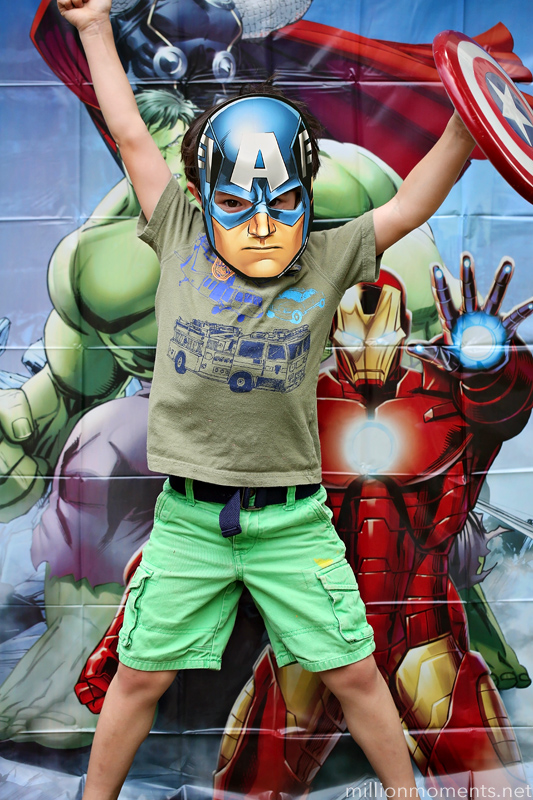 This party was one of my favorite so far, and one of the most wallet friendly I’ve thrown in a long time! If you want to create a superhero party for yourself, make sure to use my printables!