This post has been compensated by Collective Bias, Inc. and its advertiser. All opinions are mine alone. #GoldFishMix #CollectiveBias

One of the best parts about living in the South during Winter is that it never really gets very cold.  While we do get a few weeks in the 30’s, for the most part our Winters are mild and hover between 40’s to 60’s throughout the season.  Awesome for a girl who hates cold weather, eh?  The past two weeks have been a bit on the colder side and I’ve started feeling a little cooped up, so when I saw a forecast for the sunny 60’s this week I decided to throw together an adorable rainbow paint party to get out of my funk featuring bright colors and Goldfish cracker mix as the star snacking solution. 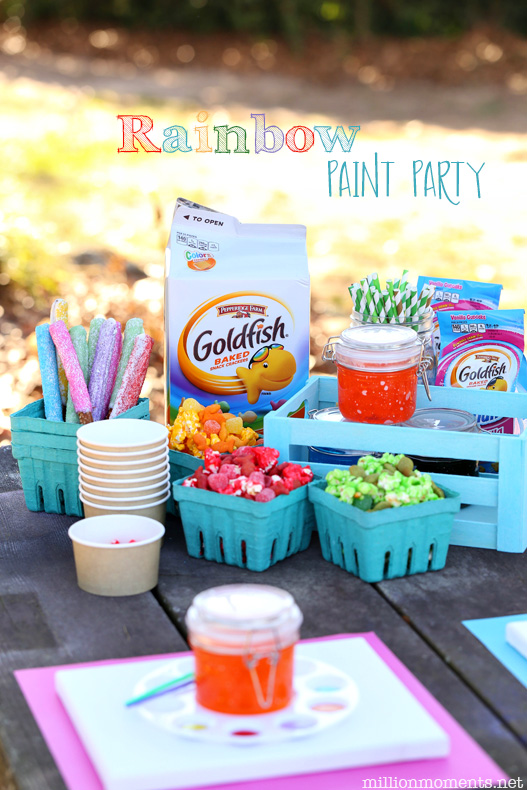 Okay so first thing first.  Why have an obviously spring-like party in the middle of December?  Well, lets face it, sometimes you just need a big dose of fresh air to shake off those Winter blues.  Plus I needed to let go of a little stress that’s been weighing me down, and I thought it would be super fun to get creative and colorful with an adorable outdoor picnic party.  Cute, right? This is great for the kids and adults alike! 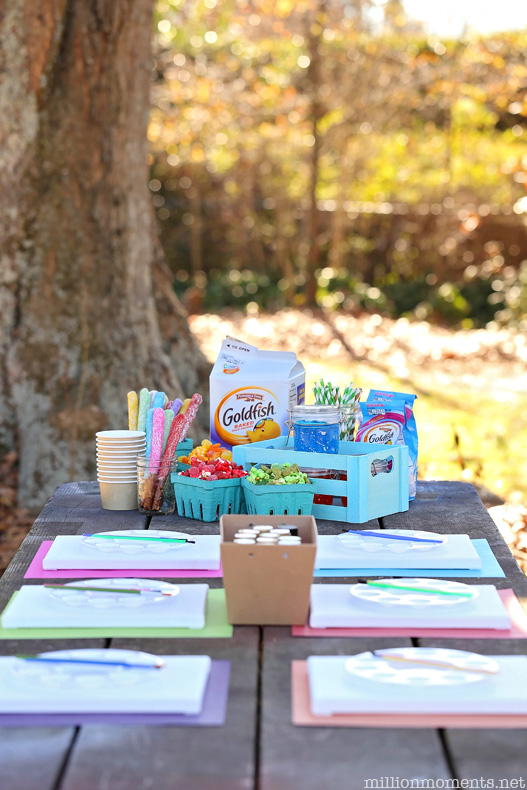 When thinking about my party, I knew I wanted to have fun snacks so I headed out to Walmart to see what I could find.  I ended up grabbing a big 30 oz box of Goldfish crackers (which just happen to be going on Rollback around the end of January), some popcorn, a bag of large pretzel rods and some miscellaneous candies and sprinkles (because I knew they would be good for something).  Once I got home I really started honing in on what theme I wanted for my party.  I knew I wanted it to be fun, but I was a little clueless as to just how to put it together when the Goldfish box gave me an lightbulb and I ended up going with a rainbow/paint theme inspired by those cute colored Goldfish crackers.

So once I was set on an idea the rest pretty much just fell into place.  For the food I wanted it to stay with the rainbow theme, so made rainbow pretzel rods and Goldfish cracker snack mix with candy coated popcorn.  Here’s how to make each of those:

First I divided some of the Goldfish crackers up into colors and put them in ziplock bags along with coordinating colored gumdrops.  How many of each you use is up to you, but I ended up with about a cup of each color Goldfish. 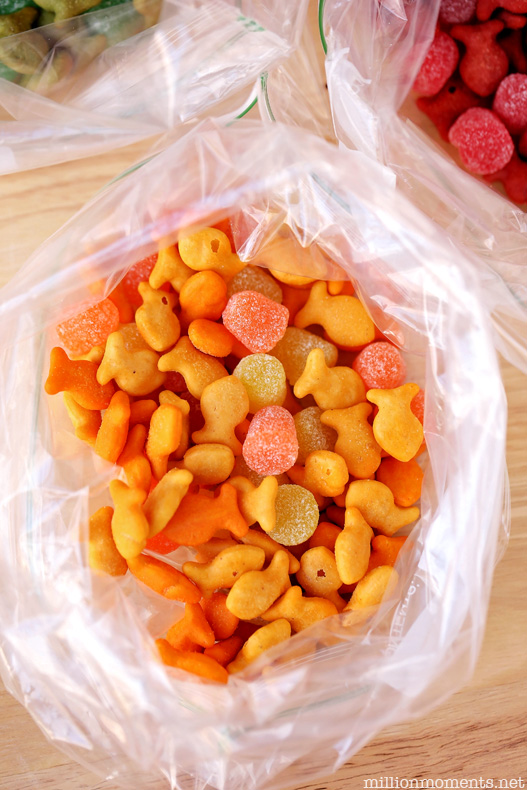 Now set that aside and start on your popcorn.  To do that, pop one bag and then immediately dump it into a large bowl covered with aluminum foil to keep it warm.  While your popcorn is popping, combine your corn syrup, sugar, butter and cream of tartar in a small saucepan and heat on medium-high until boiling while stirring occasionally.  Once boiling, take it off all heat and then stir in a few drops of food coloring.  Now pour it onto your popcorn, making sure to coat as evenly as you can.  Quickly stir it up before it starts to harden and then spread out the whole thing onto a sheet of parchment paper to harden for about ten minutes. 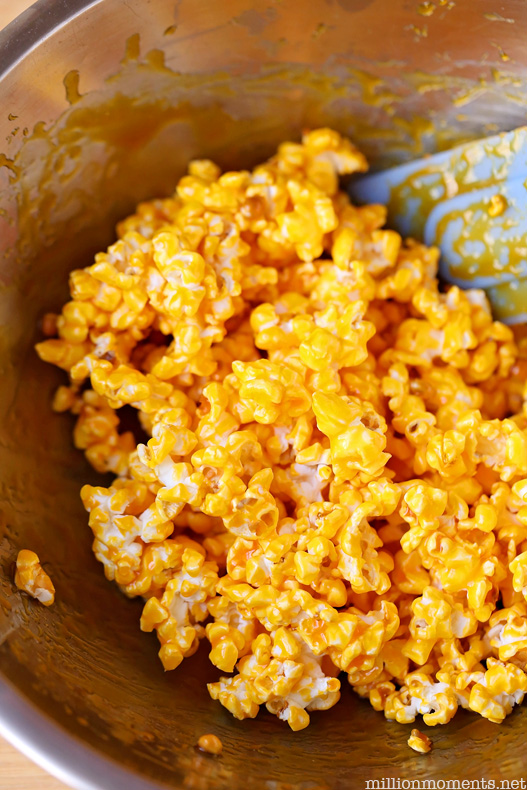 Once it hardens, break it up, mix it in with your Goldfish crackers and gumdrops and you are finished!  Isn’t that just adorable?  I did a yellow, red and green mix for each of the Goldfish colors and they turned out even better than I had hoped for!  I served them in adorable little berry crates that I picked up at a local craft store forever ago and the colors pop really well together! 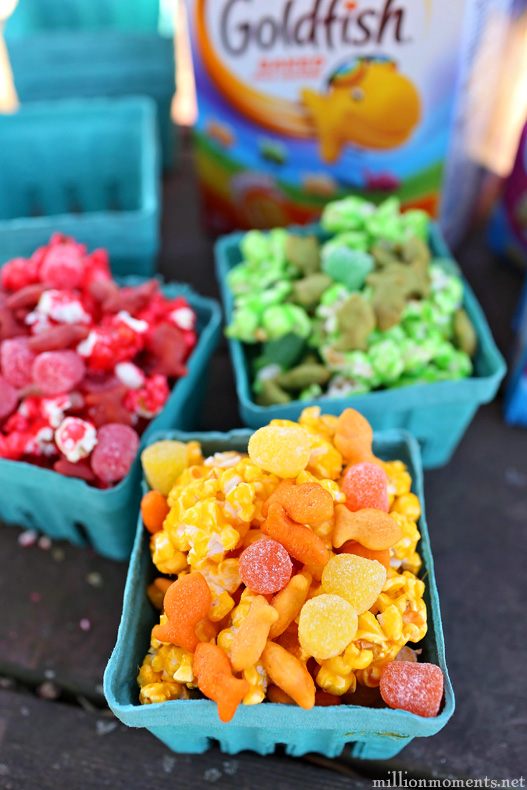 And here’s a better view of each variety.  If you didn’t want to serve them in these little crates you could also divide out the snack mix into smaller portions and put it in treat bags for your guests to take home. 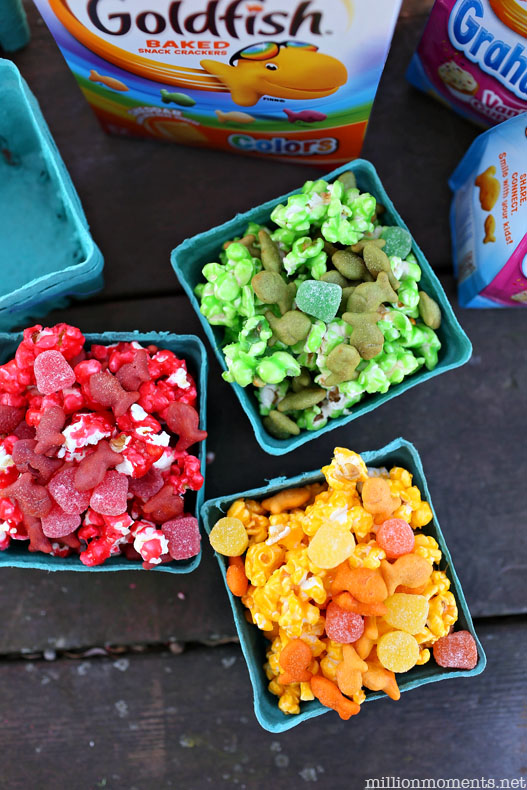 My other snack was white chocolate covered pretzel rods with rainbow sprinkles, and those were super easy to make.  For those you will need a bag of large pretzels, a bag of white melting chocolate and various colors of sugar sprinkles.  All you have to do for these is microwave your white chocolate, dip the pretzels in and then cover in sprinkles.  Easy peasy, right? 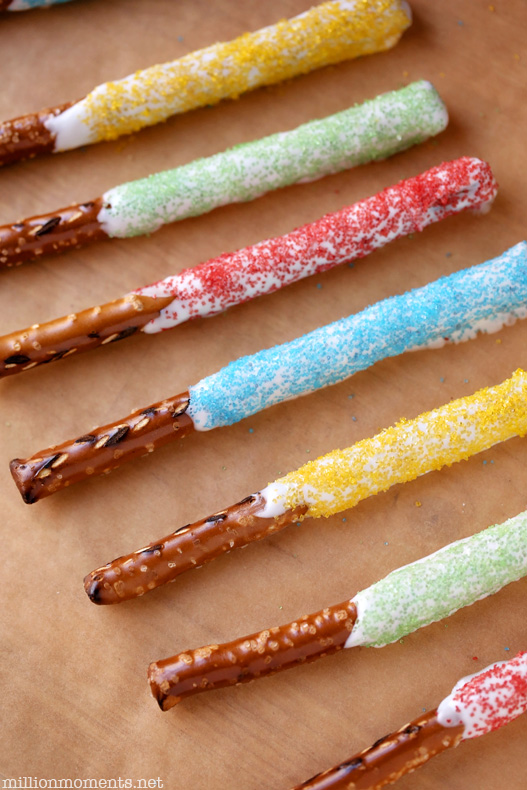 They fit in perfectly with my rainbow party theme! 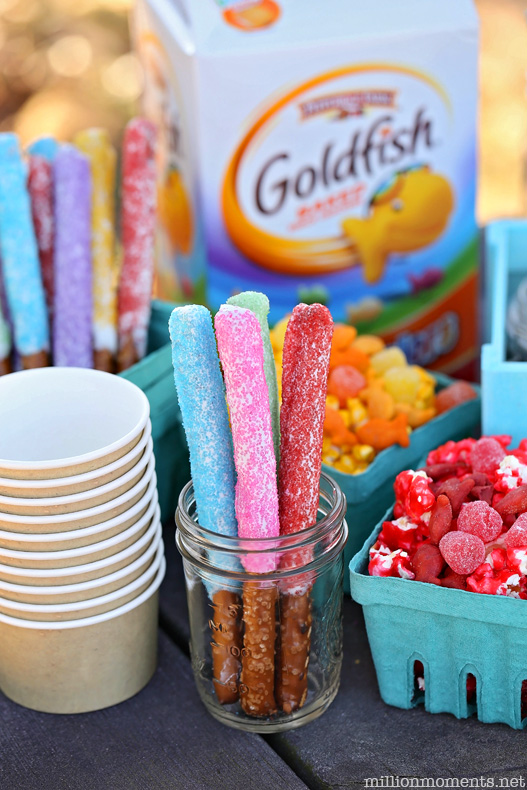 Okay seriously, don’t you just love this table spread?  It is fun, festive and full of color! 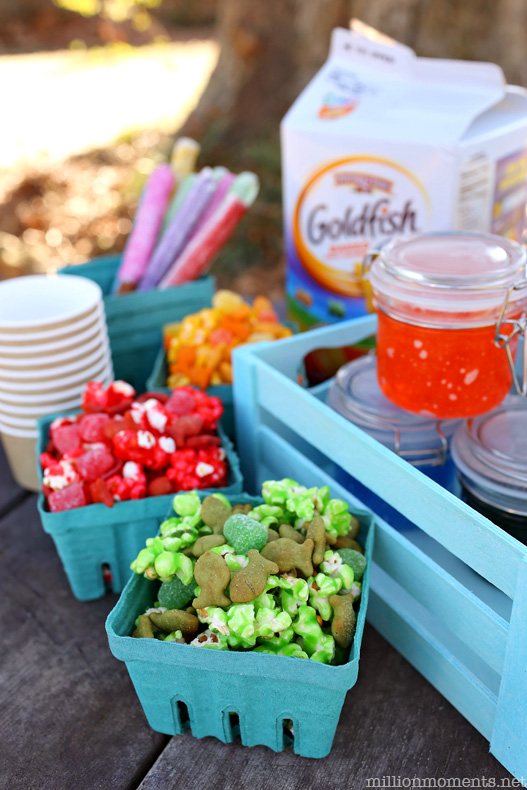 Now that the snacks are out of the way, lets talk activities.  Have you ever been to a party where people were just sitting around?  Because that’s what happens when you don’t have something fun planned to help pass the time.  I didn’t want my party to be super boring, especially for the kids, so I thought it would be fun to set out some canvases and paint for guests to get artsy while they were here.  I set out six stations for those who wanted to paint.  Each station has a colored mat for spillage/messes, a small canvas, a paint tray and a few paint brushes.  There’s also a bucket of paints in the middle.  Cute, right? 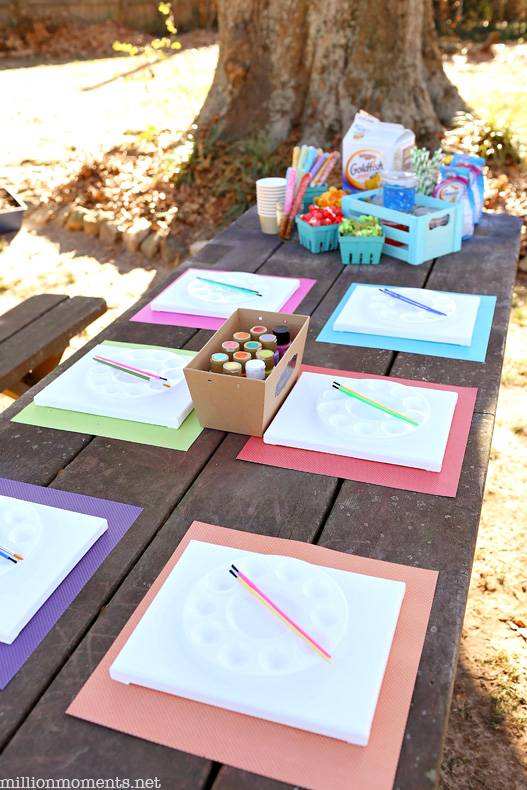 For party favors I made some homemade silly putty using my own recipe and set those out on the table for people to grab. 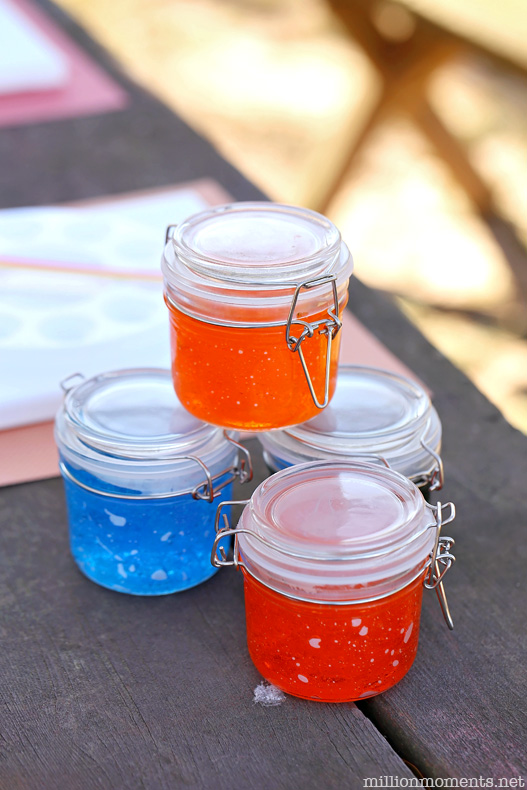 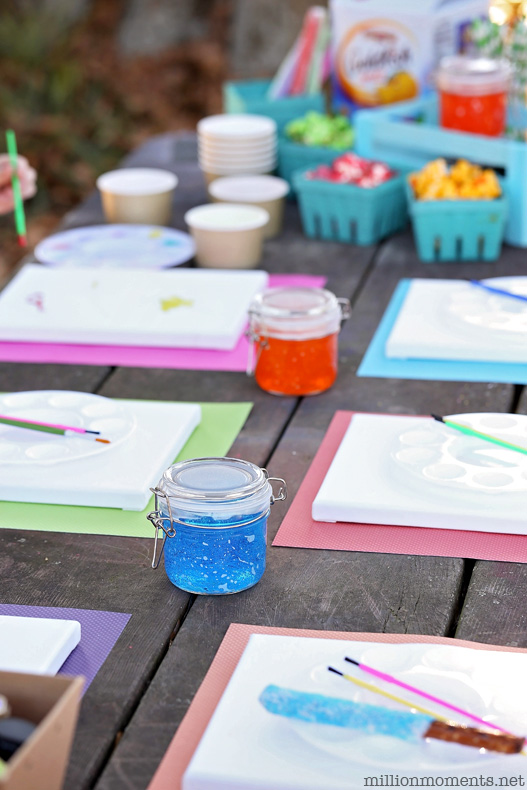 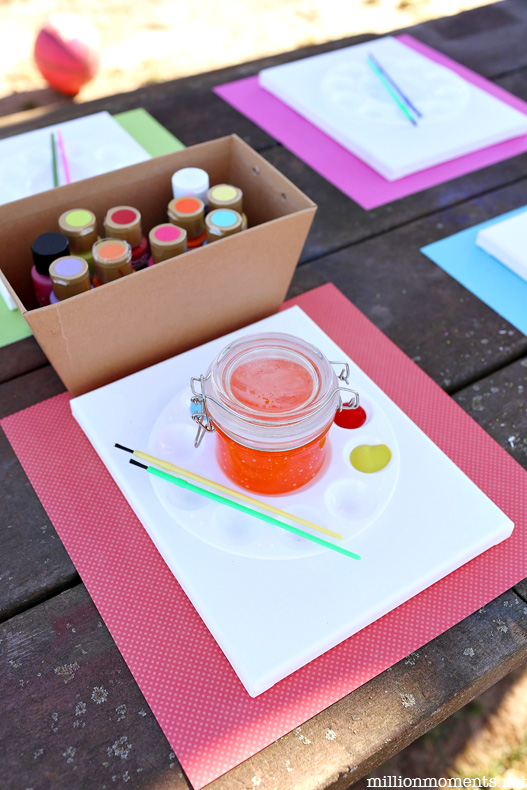 Everyone had a great time at the party, and I had a lot of fun putting it together!  I am usually not a fan of party planning because it stresses me out, but this was hands down the simplest yet most fun party that I’ve had in a long time!  I loved thinking up all the little details that fit together and made up this cute celebration. Check out the rest of the cute shindig below! 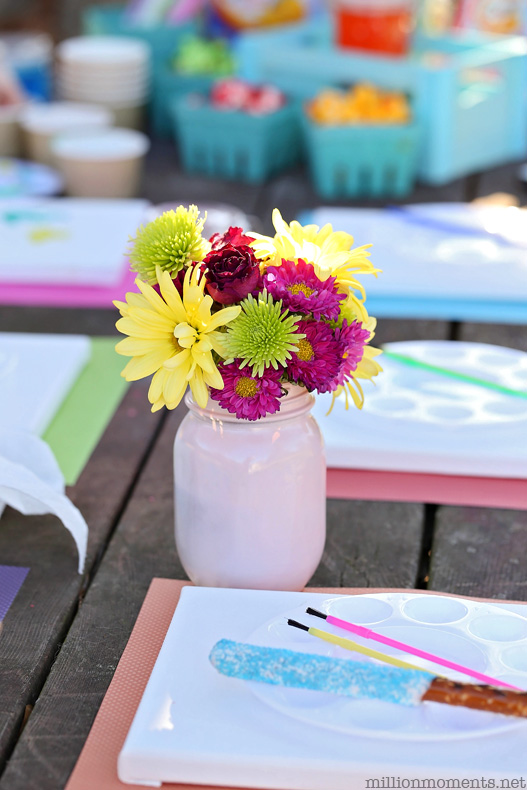 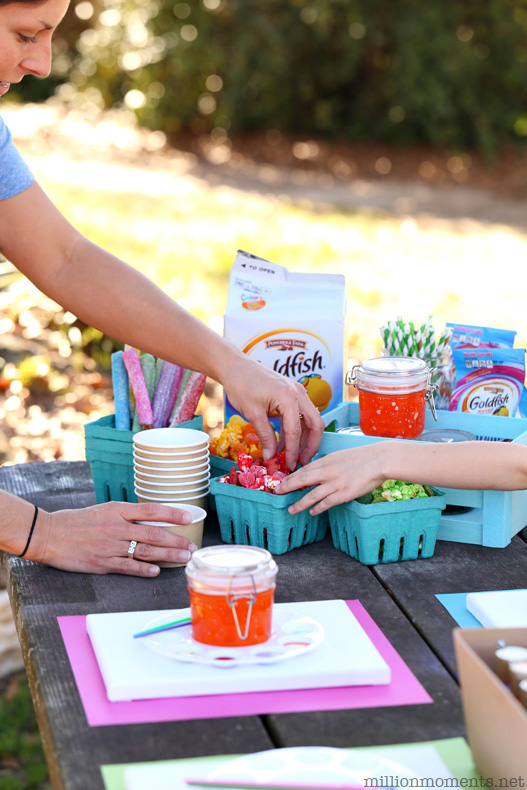 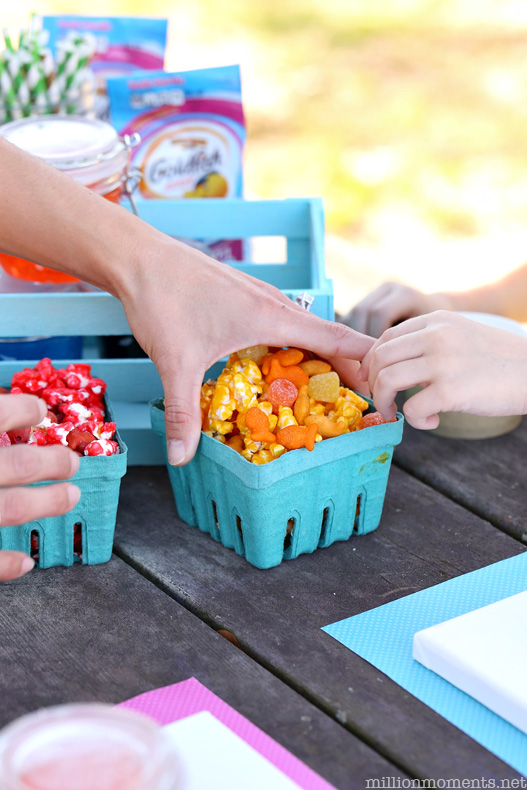 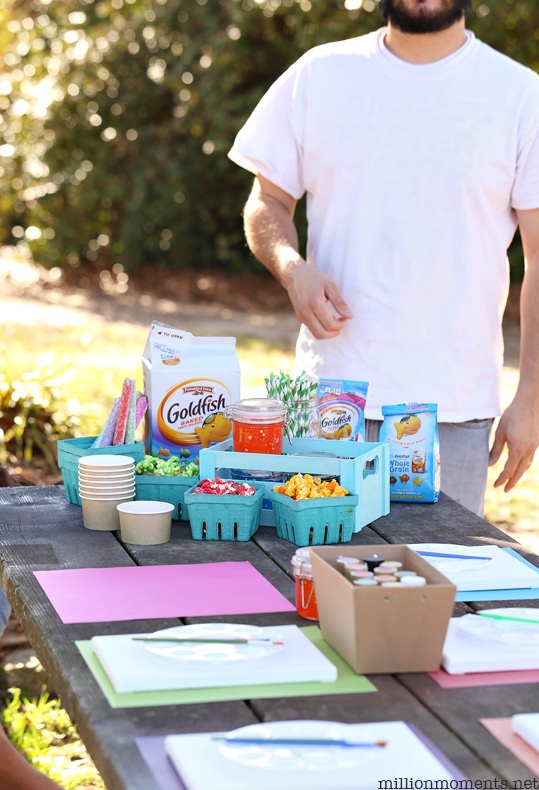 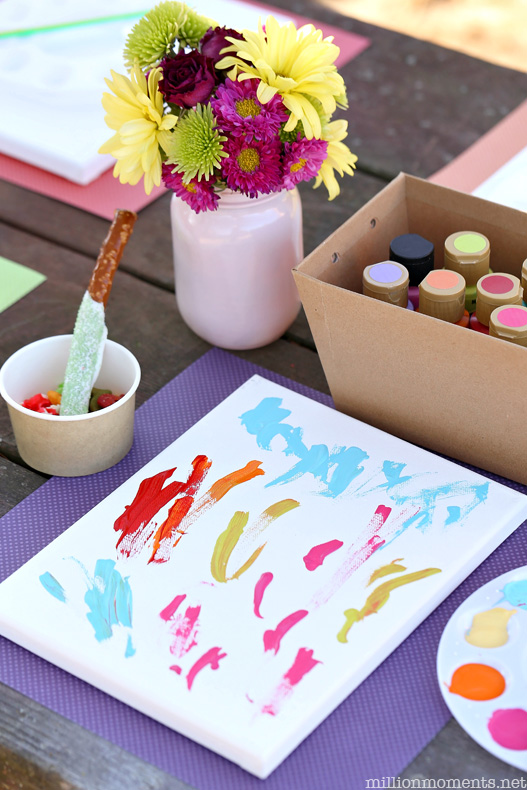 This party was a total hit and just the ray of sunshine I needed!  If you want to have a fun rainbow party for yourself, you can find almost everything here in your local Walmart.